A New Theory of Climate Change

Man-made carbon dioxide is generally thought to produce global warming. However, in a recent article entitled "Does Carbon Dioxide Drive Global Warming?" I presented several major reasons why carbon dioxide is probably not the primary cause.1 But if carbon dioxide is not the cause, then what is? Evidence is accumulating that cosmic rays associated with fluctuations in the sun's electromagnetic field may be what drives global warming. A new theory called cosmoclimatology that proposes a natural mechanism for climate fluctuations has been developed by Henrik Svensmark,2 Head of the Center for Sun-Climate Research at the Danish National Space Center.

Edward L. Maunder reported in 1904 that the number of spots on the sun has an 11-year cycle.3 Sunspots can be observed in real time online at www.spaceweather.com. Figure 1 shows a 400-year record of the monthly number of sunspots. Note the low number of sunspots in the period from 1645 to 1715. This period is called the Maunder Minimum4 and coincides with the Little Ice Age, the coldest period of temperature during the last 1,000 years. 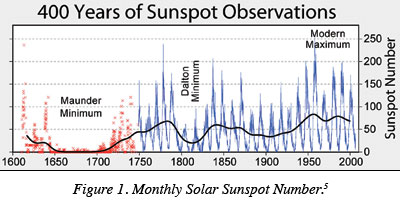 For many years, climatologists attempted to correlate the number of sunspots with various climate variables, including temperature and precipitation. By the 1980s these attempts were determined to be futile, because the percentage change in solar heating was found to be insufficient to explain the variations. However, this interest began to increase the connection between cosmic rays and sunspots, carbon-14 in the atmosphere, beryllium-10 on the surface of meteorites, and other processes. In particular, it was found that carbon-14 dating needed to be corrected for fluctuations in cosmic ray flux. Without such adjustments, many carbon-14 dates were inconsistent. The question was raised, could cosmic rays affect other geophysical phenomena as well?

In 1995, Henrik Svensmark discovered a startling connection between the cosmic ray flux from space and cloud cover. He found that when the sun is more active--more sunspots, a stronger magnetic field, larger auroras, stronger solar winds, etc.--fewer cosmic rays strike the earth and cloud cover is reduced, resulting in warmer temperatures. Figure 2 shows the relationship he found between low-level cloud amount derived from satellite data from the International Satellite Cloud Climatology Project and cosmic ray counts from Climax, Colorado. 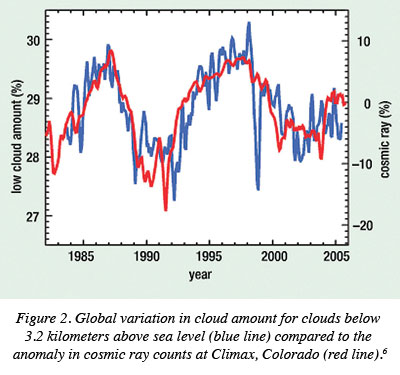 It is evident in Figure 2 that for the 22-year period from 1983 to 2005, the average amount of low-level cloud follows the flux of cosmic rays very closely. In fact, Svensmark claims that the correlation coefficient is 0.92, a very high correlation for this type of data. In addition, when looking at various longer periods of record using proxy data for these two variables, he also found good correlations and similar trends. In particular, he suggested that during the Little Ice Age when the sun was inactive, cosmic ray flux from space was high, cloud amount was greater, and global temperatures were cooler. As the sun became more active after 1750, cosmic ray flux decreased, cloud amount decreased, and global temperatures warmed. Svensmark proposed that the global warming we've experienced for the past 150 years is a direct result of an increase in solar activity and attendant warming.

A potential change in cloud cover of 3-4 percent caused by changes in cosmic ray flux is sufficient to explain global temperature changes of several degrees due to the change in the reflectivity of clouds. The reason the variation in direct radiation from the sun was rejected earlier is because it has been found to vary only by a few tenths of a percent. This is insufficient to explain observed global warming.

These statistical correlations are intriguing, but many critics are skeptical of Svensmark's theory until he can explain the mechanism by which cosmic rays create more clouds. This led him to design a laboratory experiment to demonstrate that cosmic rays produce more cloud nuclei on which cloud droplets can form. In 2007, Svensmark et al published the results of an experiment which confirmed his theory that cosmic rays increase the number of cloud condensation nuclei (CCN).7

Most CCN that nucleate cloud droplets in water clouds near the earth's surface are composed of compounds of sulfuric acid derived from water vapor, sulphur dioxide, and ozone found in the atmosphere over the ocean. Svensmark built a cloud chamber containing these gases to see if CCN can be multiplied when cosmic rays are introduced into this mixture. He found that the cosmic rays ionize molecules in the air, releasing electrons that in turn attach themselves to oxygen molecules and collect other water and sulfur dioxide molecules to form clusters. This process occurs extremely rapidly and many times for each electron. The electrons function as a catalyst to form clusters of molecules that grow and produce sulfuric acid CCN. When the air is lifted by normal meteorological processes, these additional CCN form more dense and widespread clouds because of their greater number.

In addition to the results Svensmark obtained from the experiment above, which he called SKY, he anticipates confirmation of his results in a more complete experiment called CLOUD to be conducted at the CERN laboratory in Geneva, Switzerland. The experiment at CERN was delayed numerous times, but has now been funded and approved for 2010.

Svensmark's theory of cosmoclimatology is now complete. He has discovered a complete chain of events that explains the variations in global temperature that have puzzled climatologists for so many years, and that has now led to an explanation for the recent global warming episode. It starts with cosmic rays coming to earth from exploding supernovas and collisions of remnants of stars with nebula in space. Many of these cosmic rays are shielded from striking the earth by the electromagnetic activity of the sun. When the sun is active, the solar wind prevents cosmic rays from entering the earth's atmosphere by sweeping them around the earth. When the sun is inactive, more of them penetrate the atmosphere. Upon reaching the lower atmosphere where more sulphur dioxide, water vapor, and ozone is present, the cosmic rays ionize the air, releasing electrons that aid in the formation of more CCN and form more dense clouds. This increase in low-cloud amount reflects more solar energy to space, cooling the planet. Variations in electromagnetic activity of the sun and fluctuations in cosmic ray intensity from space result in the periodic warming and cooling of the earth.

Solar-modulated cosmic ray processes successfully explain the recent global warming episode. It would be prudent for the political leadership in the U. S. and the world to look more closely at Svensmark's theory of cosmoclimatology for an explanation of global warming before restructuring our entire economic system to eliminate carbon dioxide. If, in fact, Svensmark is correct, reducing the concentration of carbon dioxide will have little impact, anyway.

* Dr. Vardiman is Chair of the Department of Astro/Geophysics